All wick is sealed in nitrogen-purged packaging to avoid corrosion and loss of performance from moisture and oxygen.

Order from an authorized distributor

What is desoldering wick made of?

Desoldering braid (wick) is made of fine strands of ultra-pure copper woven and coated with flux. Its geometrically precise weave design allows for maximum capillary action and solder capacity. Soder-wick optimizes heat transfer through the braid and into the solder joint, resulting in faster wicking action than any other competitive brand. Minimal flux residue on the board speeds up the cleaning process or eliminates it entirely.

How do you use a desoldering wick?

1) Place the braid over unwanted solder, preferably on the greatest solder build up so that it maximizes the contact of the braid to the surface area of the solder. 2) Next, place your iron tip over the wick at 45 degrees and allow heat to transfer to the pad. Molten solder will absorb into the braid. 3) Move the solder tip and braid as needed to remove all of the solder at one time. Careful not to drag the braid over the pads, which can scratch. 4) Once the braid is full of solder, you must trim the spent portion and move to fresh braid in order to pull more solder. Remove the iron and braid simultaneously to avoid soldering the wire to the board.

Yes. As the copper is exposed to the open air, oxygen and moisture in the air interacts and oxidizes the copper. This oxidation is most apparent by the color of the wick. The brighter the copper, the fresher the wick. Oxidized copper will darken like a dirty penny. The more oxidized the copper, the slower the wicking action. We generally recommend replacing wick after 2-years, but that can be longer or shorter depending on storage conditions. Keep the wick bag or can sealed for maximum product life. If you have wick that appears to be too oxidized to use, unroll around 6”, trim off, then test the remaining wick. The outside of the spool of wick becomes oxidized first.

Are you supposed to cut off the solder wick before or after you use it?

The temptation is to desolder an area and keep moving up the spool of braid. However, it’s best to work towards the end of the braid to isolate the heat. Once the desoldering braid is brought up to soldering temperature, the flux has been fully activated, so that part will not draw more solder. A long strand of used braid only acts as a heat sink, slowing down your process.

What is a solder wick?

Desoldering braid or “wick” is a pre-fluxed copper braid that is used to remove solder, which allows components to be replaced and excess solder (e.g. bridging) to be removed. The soldering iron is applied to the wick as it sits on the solder joint, and when both are brought up to the solder's melting point, the flux is activated and, through capillary action from the braided design, solder is drawn up the wick.

How do I figure out the shelf life of a product?

The shelf life of a product can be found on either the technical data sheet (TDS), available on the product page, or by looking on the certificate on conformance (COC). The COC can be downloaded by going to https://www.chemtronics.com/coc. Once you have the shelf life, you will need to add it to the manufacture date for a use-by date. The manufacture date can be identified by the batch number. The batch code used on most of our products are manufacture dates in the Julian Date format. The format is YYDDD, where YY = year, DDD = day. For example, 19200 translates to the 200th day of 2019, or July 19, 2019. This webpage explains and provides charts to help interpret our batch numbers: https://www.chemtronics.com/batch-codes.

Do you need to clean flux?

Yes, flux should be cleaned off of a printed circuit board (PCB) after soldering is completed. The following are the reasons to remove flux residues: Improve Aesthetic Appearance of PCB - If you are a contract manufacturer of PCB’s, the visual appearance of the board reflects on your work. A clear, greasy-looking residue around a solder joint may raise flags for your customer’s incoming QC inspectors. If the flux residue chars and forms spots on the solder joints, it may look like a true defect like a solder joint void or “blow hole”. If the flux residue is from a rework process, it acts as a fault tag in the rework area, calling attention to the work even if there shouldn’t be a concern. Improve Reliability of PCB - Reliability requirements are generally driven by the nature of the final product. For a disposable product like a computer keyboard, nobody loses their life if it stops working. In that case, an EMS supplier may use no-clean flux and forgo the cleaning process. On the other end of the scale, requirements for pacemaker electronics, where board failure could directly lead to death, are going to be much stricter. In that example, cleaning will be required after assembly and any subsequent rework, and the process will be thoroughly tested for effectiveness and repeatability. Long-life durable goods may fall somewhere in-between, with cleaning a requirement, but without the rigid testing and controls. Prevent Corrosion on Components and PCB - Flux residues left on electronic circuit boards are acidic. If they aren’t removed with a cleaning process, the residues can draw in ambient moisture from the air and lead to corrosion of component leads, and PCB contacts. Avoid Adhesion Problems with Conformal Coating - Most people understand that when painting something, the surface must be prepared so it is absolutely clean. Otherwise, the paint will quickly lift off the surface and peel off. The same logic applies to conformal coating, even when the contamination is from no-clean flux. “No-clean” refers to the amount of ionic material left after soldering. It has nothing to do with whether or not coating can stick to it. When there are flux residues left on the PCB before the coating process, it is common to see the coating lift or delaminate from the surface of the board. This is evident when the pockets are isolated around solder joints rather than the overall surface (the exception being the bottom of a wave soldered PCB). To make matters worse, coatings are generally semi-permeable, so breathe to a certain extent. Moisture can enter and soak into the flux residue, and potentially lead to corrosion. Prevent Dendritic Growth from Ionic Contamination - Polar or Ionic particles left from flux residue and other sources, when exposed to moisture from the ambient air and when current is applied, can link into a chain or branch called a dendrite. These dendrites are conductive, so form an unintended trace that cause current leakage or, over a longer period of time, even a short circuit. This is not as much of a concern for no-clean flux. No-clean flux contains minimal ionic material that is fully consumed when the flux is activated, or in other words, brought to soldering temperature. If all of the flux isn’t activated, like when you apply a lot of flux but only solder a small area, you still need to clean the PCB. 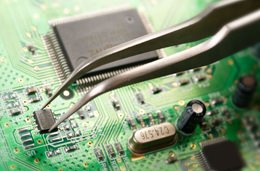 The reality is that no soldering operation produces perfect assemblies every time. Even the highest quality components fail from time-to-time. That’s why understanding the best rework and repair methods and materials is so important for those who manufacture, maintain, or repair printed ci...
Read This Post 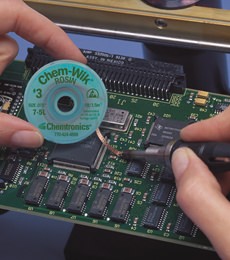 By Grant Price, Product Manager, Chemtronics The reality is that no soldering operation produces perfect assemblies every time. Even the highest quality components fail from time-to-time. That’s why desoldering is so important for those who manufacture, maintain or repair pr...
Read This Post
You did not finish submitting your information to request a sample